Namine’s physical therapist has been working with her lately on climbing into her wheelchair. It’s been slow going, and we’re not sure why. We have some theories, though.

Namine has been playing catch-up, so to speak, ever since her heart surgery. Hospital time is down time, after all, and sitting in a hospital bed for weeks on end has a way of making you lose strength you once had. And it’s not just the time in the hospital – even after discharge, Namine wasn’t allowed to pull her weight for a long time.

But now that she is active again, she’s making up for lost time and declined strength. The seats in the recliners that Jessica and I have in the apartment are roughly the same height as Namine’s wheelchair, so they serve as pretty good practice, or so we thought.

When we’re in the living room, Namine is comfortable sitting on the floor. If Jessica happens to leave her chair for any reason, Namine climbs up into it. Jessica will come back into the living room and find Namine in her chair. “I stole your chair!” Namine says, and cackles with laughter. (Should I be worried that she practices her “evil laugh” in her room?)

But despite the ease with which Namine can climb into our recliners, she still finds it difficult to climb into her wheelchair, thus the work at therapy. But the question remains: why?

I don’t think it’s strength; at least, not solely. I think a big part of it has to do with hand placement. The recliners, being wider, provide enough room on the sides for Namine to grab onto. That width is simply not there on the wheelchair, which was designed for a much smaller butt.

The wheelchair’s brakes seem to be perfectly placed for grabbing onto when climbing in, but that is not their purpose. They were not designed to be handholds, and Namine is not allowed to use them; nor is she to use them wheels themselves. Further up, located by the top of the wheels, are plastic handholds. But even from a standing position, Namine’s outstretched arms can barely reach them. Simply put, the problem boils down to leverage. Namine’s short height and the wheelchair’s lack of low handholds work against her. So it remains a priority for her physical therapist to continue working with her to improve climbing in the wheelchair by herself. 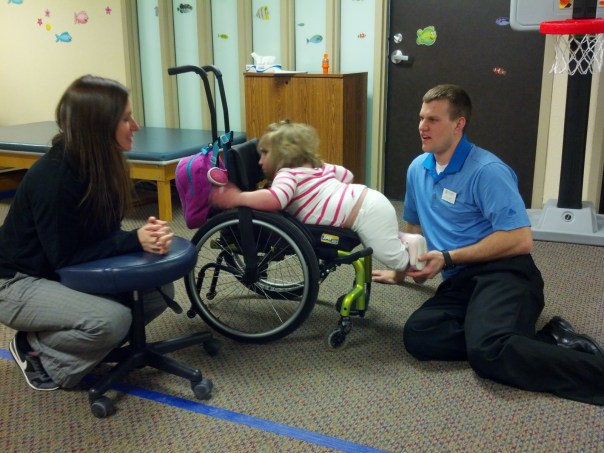